The Inflation puzzle – should investors be worried?

Inflation is complex and while many of the factors that have driven inflation high since the pandemic may ease and normalise, the longer-term picture is far from certain. The best defence for uncertainty, as always, is a diversified portfolio that contains some inflation protection. 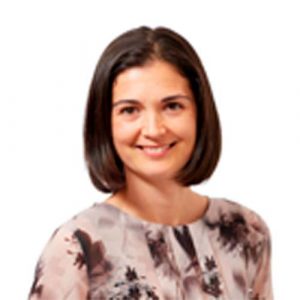 With US inflation at multi-decade highs, we seem to be surrounded by economists and market commentators postulating on the cause of the current spike in inflation, the degree to which it will be transitory, and what, in fact, ‘transitory’ means.

The level and persistence of inflation is significant for investors not only because of its influence on central bank policy, interest rates and the potential impact on market volatility – at a more fundamental level, higher than expected inflation reduces investors’ capacity to deliver on real return objectives and, in turn, compromises the spending power available for end beneficiaries and members.

In the 10 years between the end of the global financial crisis and commencement of the COVID pandemic, the key question about inflation was why inflation remained stubbornly low in developed markets despite a backdrop of low policy rates and low levels of unemployment. Anchoring of inflation expectations, monetary policy, demographics and changing labour markets, globalisation of trade and continued technological improvements were all considered as potential drivers of low inflation. The accuracy of current measures of inflation were also questioned, with some arguing that inflation “felt” higher than the official inflation statistics implied. There were concerns inflation would never rise to a level that would enable rates to rise and that this would reduce the ability for central banks to fight future crises.

The market and economic disruption caused by the COVID pandemic and lockdowns, combined with central bank and government action to provide unprecedented levels of support to businesses and households saw heightened uncertainty with respect to inflation expectations. At the extremes, some warned of prolonged, Japan-style deflation, while others argued that the combined impact of fiscal and monetary stimulus would lead to significantly elevated inflation. But most considered that inflation would remain anchored in the 0-2% range. As inflation continued to surprise on the upside, 2021 saw the term ‘transitory’ dominate the lexicon. 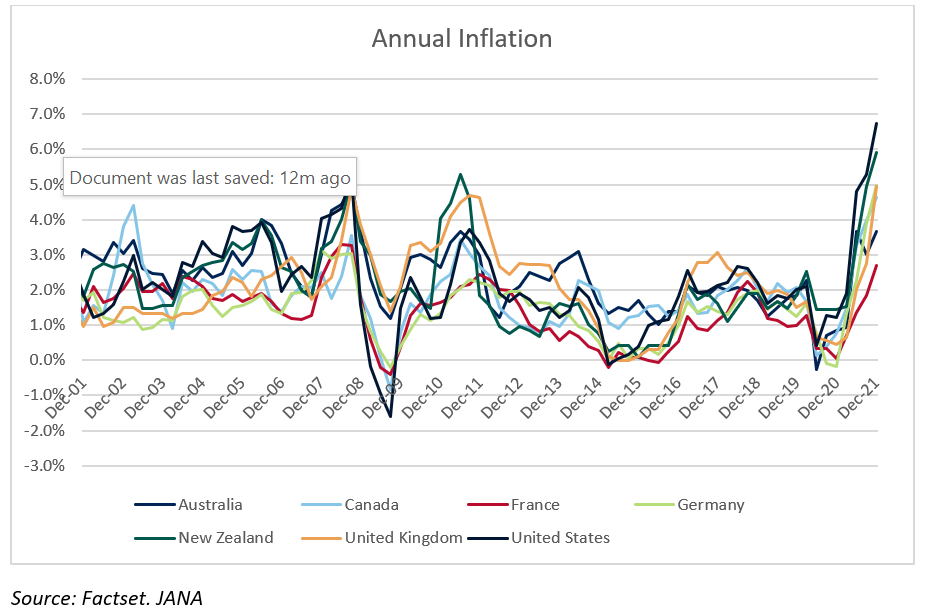 The US has led the world in terms of higher inflation during the pandemic, but it is an experience that is being felt across the developed world, with elevated inflation across the UK, Germany, Canada and New Zealand. Euro zone inflation may continue to rise further over 2022 as rising gas prices start to flow through to CPI. In Australia, the December CPI print was higher than expected, but much lower than the US at 3.5% p.a. compared to 7% p.a. New Zealand also reached a three-decade high, at 5.9% p.a. for the year to December.

While the underlying drivers of inflation have varied in different countries, considering the US experience is instructive for understanding the possible persistence, or otherwise, of elevated inflation.

US inflation – the diagnosis most agree on

While the quantum of inflation proved a surprise, the consensus amongst economists has been that US inflation over 2021 was driven by temporary factors. Taking a look at the drivers of inflation over the period can help understand why that would be the case. While there is no doubt that the rise in fiscal transfers to households, combined with lockdowns and supply chain disruptions led to a spike in household goods demand and prices, this extended beyond peloton bikes and toilet paper. The rise in US inflation over 2021 was led by energy and cars – including used cars, which experienced an unprecedented rise in prices as a result of major shortages of semiconductor chips that, in turn, resulted in a shortage of new cars. Food prices were also elevated as a result of pandemic related disruptions. 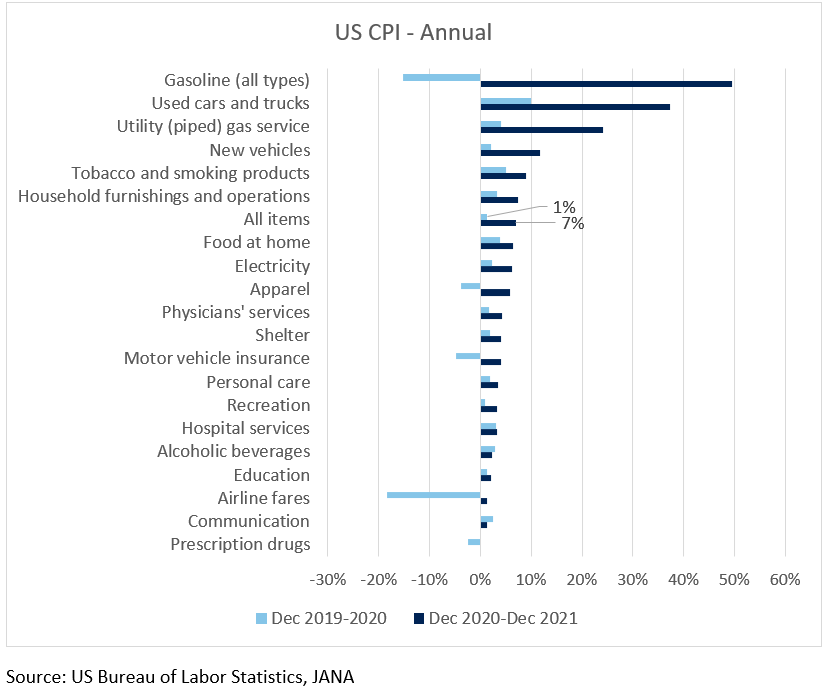 What does this mean for 2022 and beyond?

There is no doubt that the inflation experienced over 2021 has impacted living costs for households, but for inflation to remain high over 2022 and beyond, some components of the CPI basket would need to increase from their current elevated levels.

While it is easy to find economists with very different views regarding near term inflation, most of the difference boils down to differences in the time horizon and precise path for a normalisation of the pandemic related drivers of inflation. The consensus view is that these will ultimately diminish through a combination of running their course and because of the impact of expected interest rate rises.

If this view proves correct, and inflation proves to be a temporary phenomenon, potentially even having a short dip into deflation on its way to normalisation, long term investors arguably have less cause for concern.

Inflation is a complex variable that is very challenging to forecast. This becomes more so when trying to consider the longer term, where secular themes are at work more so than the cyclical or temporary factors that get most attention. Adding to this is the opacity of what truly drives inflation, and the potential role of inflation expectations in influencing inflation levels – if individuals believe inflation will be persistently higher, theory says they will demand higher wages, triggering an inflationary spiral.
While the consensus view is that, once normalisation occurs, the developed world will return to the modest growth and inflation path it was on prior to the pandemic, there are divergent views that point to additional sources of inflationary pressure over the medium term which could, in a worst-case scenario, lead to expectations of persistent elevated inflation and pressure on wages.

Below we outline some key variables economists and other market commentators argue will influence inflation over the medium and longer term. 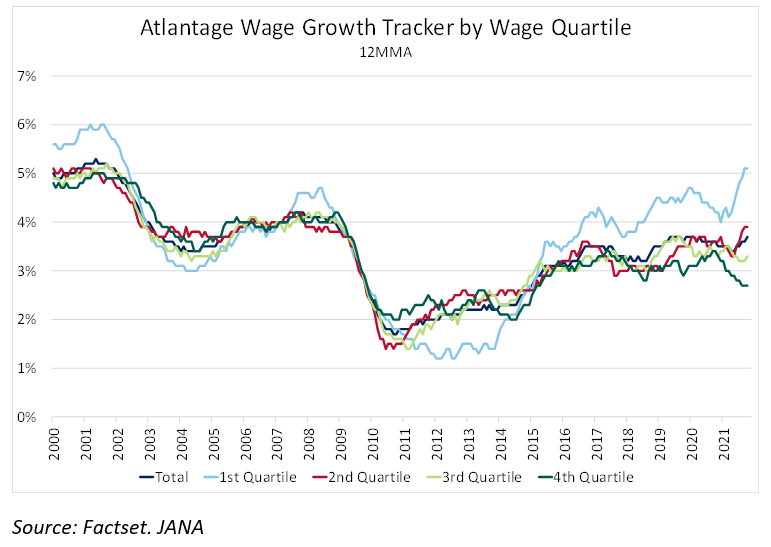 Should investors be worried about inflation?

Australia has thus far escaped the high levels of inflation faced by the US; New Zealand has been less fortunate. The 3.5% CPI print for the year to December was a surprise and has led many market proponents to expect rate rises sooner than the RBA has previously indicated. Much of this rise has been driven by energy prices and the hot property market. Unlike Europe, where high gas prices are yet to flow through to CPI, Australia appears to have no near-term obvious drivers for yet higher inflation.

Inflation is complex and while many of the factors that have driven inflation high since the pandemic may ease and normalise, the longer-term picture is far from certain. The best defence for uncertainty, as always, is a diversified portfolio that contains some inflation protection.